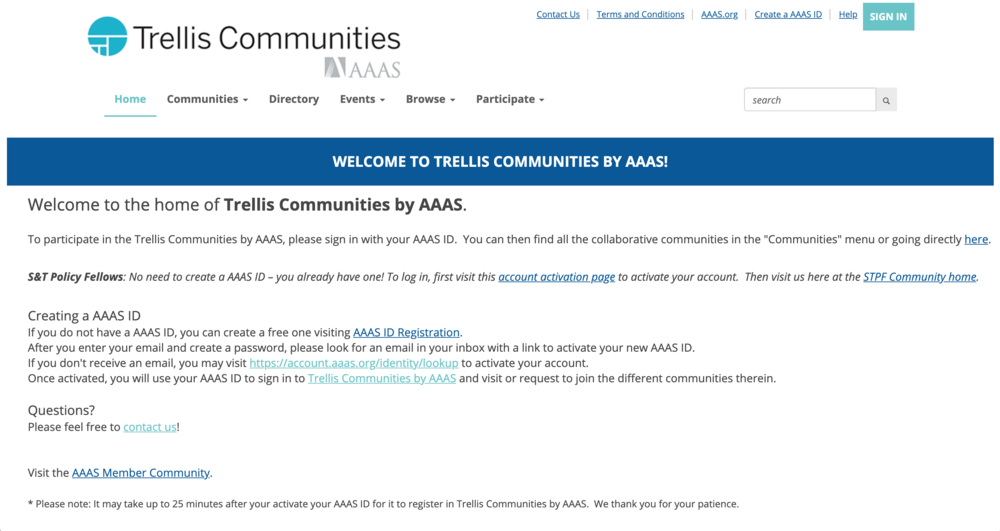 Trellis was created by the American Association for the Advancement of Science (AAAS) to provide a single platform to bring scientists together to share resources related to specific projects where they would be working in groups.

The AAAS is the largest multidisciplinary scientific society in the world. Membership is broad, including anyone active or interested in science, technology, engineering and mathematics. The society’s activities are focused on innovatively addressing topics that cut across disciplinary divides. These include, but are not limited to, public engagement, science diplomacy, science education and the shaping of science policy. In building Trellis, the AAAS aimed to support multidisciplinary communication and collaboration among its membership by providing ‘a single place for anyone in science to engage with all of the communities to which they belong’. All 120,000 AAAS members were invited to Trellis, as well as non-member scientists who belonged to other professional associations, working groups, and scientific teams.

In operation, Trellis’s core features include document sharing (uploading and annotating), the integration of existing services like Google Drive, threaded forum discussions, a profile-based connection and collaboration system, advanced search, tagged browsing, and shared group calendars. AAAS focused on how these different functionalities could interact to support platform users through a system of interconnected documents that could be linked or displayed when and where they were referenced or relevant.

Beyond these core features, Trellis’s dominant characteristics are its group orientation and its focus on content. AAAS members belong to one large MemberCentral Community group, as well as discipline-specific sub-groups that they self-selected through their membership in the association. These sub-groups range in size from a few hundred to a few thousand members. In addition to the AAAS, numerous external organisations have used the platform as well.

Groups on Trellis are either completely private, or public and discoverable within Trellis. Some public groups were open for anyone to join, whereas others operated on an approval basis. AAAS noticed that these groups had different content needs and means of encouraging interaction between members. In the main AAAS MemberCentral Community group, discussion is facilitated by AAAS community managers and kept very general, mostly to higher-level topics that members would want to convene around in smaller groups. In subject-specific groups, the AAAS has provided resources to group leaders in determining a content and engagement strategy, having recognised early on that groups with active community managers were much more successful at engaging their members than those with inactive leadership.

Trellis groups have used the platform for a variety of activities including planning teaching activities through sharing resources, discussing within communities of practice, hosting journal clubs where readers log in to discuss at a designated time, and live text-based chats with experts.

The development of Trellis was part of a larger transformation initiative at AAAS that sought to experiment with alternative business models and engage its membership by facilitating connections between them. As AAAS was scoping its own work in this area, they noticed that other scientific organisations and communities were also struggling to connect their members and facilitate collaborations between them. They realised that if they were to build a platform that addressed their own needs, they could help address common challenges. However, sustaining the implementation of this project became challenging for AAAS, a not-for-profit, and they are no longer pursuing additional product development for this project.

The AAAS regularly asked for user feedback and took a transparent, community-guided approach to building the platform. Trellis’s model sought to provide an environment that facilitated discussion and discovery across scientific disciplines. The platform tended to be used more for in-depth discussion on particular topics rather than high-volume link sharing. For example, Science Group, an organisation external to the AAAS, used Trellis to bring together scientists, scholars, and professional practitioners to figure out how scientists can better engage with the public. The group hosted weekly live chats. They advertised topics in advance, produced a one or two page summary that participants could read beforehand, and uploaded related content. Group members could then participate in live chats with experts close to the topic, which in some cases included people with experience implementing a certain project. Participants could ask about implementation and potential for translation and scale.

Strengths: By allowing people to convene around and connect through topics that interested them in a fairly open platform, it seems like Trellis was able to successfully encourage members to work across disciplines. The platform’s unique consideration of content as an opportunity for collaboration was appropriate for the community members, who were mostly scientists regularly engaged in reading, writing, and commenting on research.

Weaknesses: The AAAS is discontinuing Trellis in 2019 and will not continue to develop the platform beyond its current beta release. This decision has been attributed to an incompatibility between product development timelines and the need to sustain a not-for-profit organisation.

AAAS relied on a high level of human involvement to run Trellis – not just the technical infrastructure, but also for providing community infrastructure. However, while this meant that the platform became unsustainable for the not-for-profit, the high level of engagement, particularly with group leaders, was a key attraction and resulted in higher levels of group participant engagement.