Provides a blockchain-based infrastructure for organisations to manage their resources and decision making in an automated and programmable way to enable alternative organisational structures. 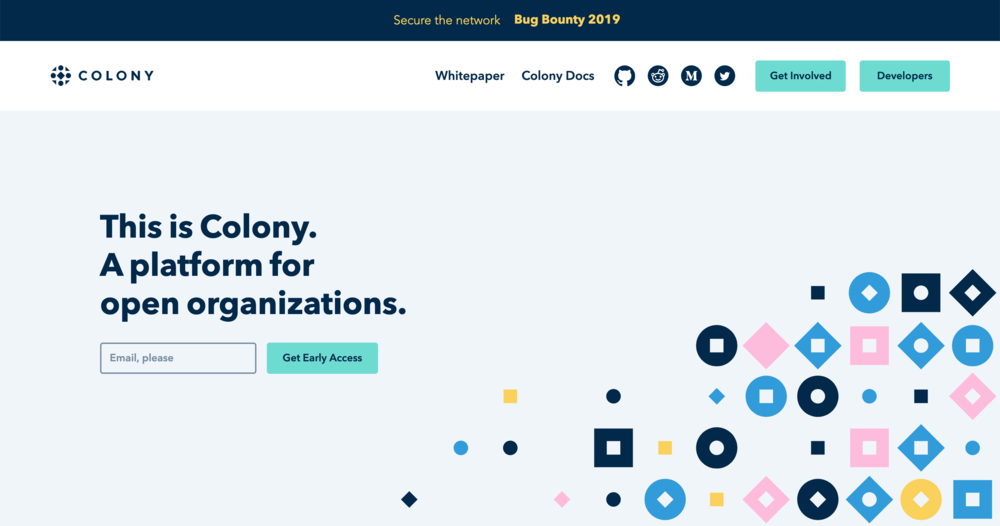 Before founding Colony, Jack du Rose was a jeweller making high-end items such as artist Damien Hirst's diamond-encrusted skull. He credits his company’s ability to compete with large brands to having built a team of the world’s best craftspeople distributed around the world. But he found it difficult to manually coordinate, correctly incentivise and build trust with team members. This experience led him to set up Colony.

Colony provides an infrastructure for organisations to set up ‘colonies’ so that they can manage their resources and decision making in an automated and programmable way. This allows for new forms of organisation that would have previously been difficult, such as decentralised organisations. In a decentralised organisation ownership is distributed according to the value that each person contributes. And rather than having hierarchical management, influence emerges through people reviewing each others’ work.

There are many ways to customise Colony depending on the desired organisational design. But one example is to organise a colony around tasks. In this case, collaborators earn reputation by being active and successfully completing tasks. Those with sufficient reputation can, in turn, create a task. When someone creates a task, this task is assigned to three roles at a time: a manager, worker, and evaluator. The manager is responsible for setting a due date, ‘bounties’ of tokens for each of the three roles to reward task completion, and a specification or brief that can also be used for evaluation. The manager also chooses collaborators to fill the worker and evaluator roles. To help organise tasks, Colony also allows for the creation of domains. These are modular groupings of tasks that can be organised and nested in whatever way makes sense to a colony. Collaborators earn reputation within domains, and cannot contribute toward decisions that are unrelated to the domains to which they have contributed. This ensures that people only contribute to work-streams in which they have demonstrated competency. Colonies can earn revenue in a normal currency like any other business. They would then need to convert it into the cryptocurrency they are using in their colony. This can then contribute toward their working capital, or be distributed among their collaborators.

Colony’s use is not limited to task-oriented organisations; it could be used by organisations compensating members for types of work as well. However, the general principles of earning reputation by completing work actively, and being able to define work and payments according to sufficient reputation would still hold.

Colony was founded in September 2014 and they released a technical white paper outlining the system in September 2017. At the time of writing, they have done a couple of rounds of beta testing with users and are preparing to release a version with real value being transacted. They have organisations, mostly in the blockchain space, ready to use it. They almost launched an initial coin offering (ICO, the cryptocurrency equivalent to offering shares in an initial public offering, or IPO) in September 2017 until they realised that it might be considered a security by the US Securities and Exchange Commission.

Given that Colony is yet to be released, it seems too early to assess its impact. However, they do have a set of use cases that they think would be particularly suited to using Colony.

They think it would work less well for:

They also have a key metric that they focus on: the total value of transactions across the colony network.

Strengths: Colony has some similarities to other blockchain-based tools, in particular an emerging sector that has been described as Organisational Technology (OrgTech). OrgTech tools aim to explore how the emerging blockchain sector can radically digitise and reinvent how organisations operate.

Weaknesses: Colony will have to overcome widespread scepticism and lack of awareness about blockchain to succeed, and it will have to have a transparent, easy-to-use interface to match. This seems an especially tall order as the platform’s suggested use cases go beyond the early adopter, tech-savvy community.

Colony’s genesis in and focus on solving an organisation’s problem bodes well for its potential to do the same for other organisations. It could be relevant to innovation brokerage by helping to overcome existing organisational barriers to collaboration and the exchange of work and ideas. It could also help provide a more ‘frictionless’ environment to better reward contributors to the innovation brokerage process. Explaining blockchain to people – and getting them to use it – will be a barrier Colony will have to overcome.